Gift CardsNewsCareers
Back to News

CHROMEO, WALK OFF THE EARTH, MATTHEW GOOD, THE SHEEPDOGS, WINTERSLEEP & KARDINAL OFFISHALL plus 44 other acts to perform at Riverfest Elora 2016!

The festival will be taking place at Bissell Park in Elora, Ontario on August 19, 20 and 21.

The outdoor festival, held along the banks of the Grand River, has come a long way since its humble beginnings just eight years ago. Riverfest, which started as a backyard festival in 2009 with an attendance of around 700 people, has grown exponentially in recent years and saw crowds of over 4-5,000 a day during the last few installments.

Following the successes of 2014 and 2015, which included performances by Blue Rodeo, Metric, Serena Ryder, Charles Bradley, Sharon Jones, Sam Roberts Band, Shakey Graves, Tokyo Police Club, Arkells, New Pornographers, Donovan Woods, Bahamas and more, Riverfest Elora is enjoying the continued support it has been receiving through its ongoing community and artistic partnerships and the unwavering support of its’ regional community.

Riverfest Elora is thrilled to announce its 2016 lineup:

3RD STAGE! Now with the addition of Dine Alone Records’ Wax On Wheels Stage, Riverfest & Dine Alone have been able to add more up and coming acts to the overall lineup as well as host signings and meet & greets with some of the larger festival performers.

AFTER PARTIES! The Riverfest team have also added an afterparty program which will see artistic performances by artists such as Tupper Ware Remix Party, throughout various venues in downtown Elora, ON. After party wristbands ($10) are a great way to experience more of what Elora has to offer and allow revellers to bounce back and forth between venues. Stay tuned to the website for the full after party schedule to be posted in the coming weeks.

CAMPING! Due to growing demand for camping during the Riverfest weekend, organizers have arranged an overflow camping area! This tent city will allow festival goers to have a place to rest their heads after days of basking in the glory that is Riverfest Elora.

For tickets and additional info: www.riverfestelora.com 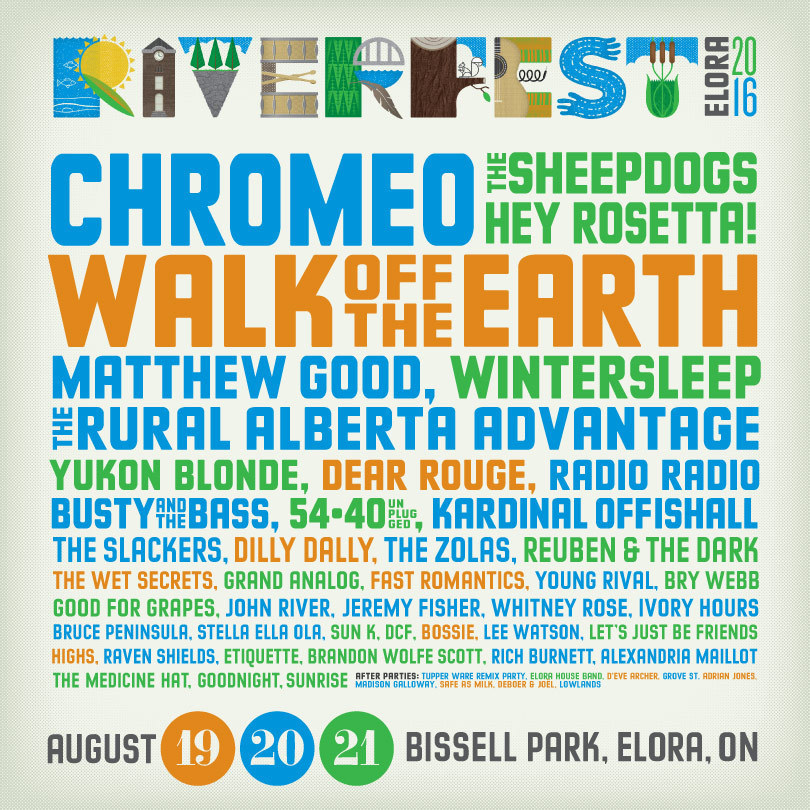